Welcome. We are a small research organization dedicated to studying dolphin communications and cognitive abilities.

Our goal is to learn how dolphins communicate certain types of non-identity information1 with each other through acoustic mechanisms. To that end, we are using a research strategy that combines theoretical models, software tools, carefully designed dolphin behavioral experiments and playback of artificial dolphin-like vocalizations. If successful, particularly with the playback feature, this may allow us to develop additional tools to begin simple, bidirectional communications with dolphins, in essence attempting to communicate with them in their way. Even an elementary system for interspecies communication such as this could significantly accelerate our understanding of the limits of dolphin acoustic communication. Not only would this advance our scientific understanding of animal cognition and communication, it is our hope that through greater appreciation of and connection with these extraordinary, intelligent animals, stronger protections for marine mammals and their ocean environment may be realized.

Mila calls Eva to come over – Watch and listen!

Above: In this video (1) Left, Paola cues Eva to “listen” and Eva then submerges. (2) Right, Juan Carlos cues Mila to “tell” Eva to come over to her and Mila then submerges. At this point the soundtrack changes to the hydrophone (underwater) recording of the dolphin vocalizations, also see spectrogram below. (3) Mila vocalizes underwater to Eva. (4) Eva then vocalizes and joins Mila for a whistle “duet”. (5) As the “duet” continues, Eva swims over to Mila. (6) They then surface together. (7) Both dolphins are thanked by their trainers. At the end, Juan Carlos and Mila share an exuberant high five.

Below: Spectrogram of the hydrophone recording from the above video of Mila “telling” Eva to come over to her.  Eva replies using whistles that match Mila’s. As Eva swims over to Mila the two dolphins chorus together with the matching, overlapped whistles. The faint whistle on the far left was produced by Mila just before she submerged.

We have designed an experimental framework in which the dolphins who are in acoustic but not visual contact must communicate in order to accomplish one of a set of specific tasks. In essence, for a task to be completed successfully one dolphin must “tell” another dolphin what to do. We can then analyze underwater recordings to see what mechanisms the dolphins used to communicate the necessary information.

In those past experiments2-4 closest to what we are doing now, dolphins were trained to communicate for only one particular task. In contrast, our dolphins have learned a more general “tell and listen” concept. That way a hand signal for “tell” can be prepended to the hand signal for any one of the behaviors known by two dolphins. A dolphin given such a two-part hand signal (i.e. “tell” followed by the signal for a specific behavior) knows that, rather than performing the behavior herself, she should “tell” the other “listening” dolphin to perform that specific behavior. Because the requested behaviors can be varied, we can investigate behavior specific differences in the communication methods used by the dolphins.

The most difficult hurdle, and the one critical to the success of all the experiments in the ongoing series, was the development of a training plan through which the “tell and listen” concept could be conveyed to the dolphins. This critical step, along with many other important contributions, was accomplished with our collaborators at Dolphin Adventure in Puerto Vallarta, Mexico.

dolphins, Eva and Mila, are the first dolphin participants in our research. For the formal trials of this first experiment, Mila was the “teller” and Eva was the “listener”. For these trials: (1) Eva is cued by her trainer to be the “listener” and submerges. (2) Mila is cued by her trainer to “tell” Eva to perform a particular task. (3) Mila submerges and communicates with Eva underwater. (4) If Mila has successfully conveyed the information to Eva, Eva can perform the behavior.

We selected four behaviors, previously known by both dolphins, to be communicated. They ar 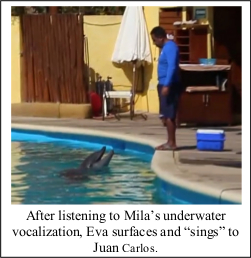 After completion of the training phases, which were usually performed with both dolphins at opposite ends of the same pool, Mila and Eva were transitioned to working in separate pools (see video at top of page). Although the dolphins could hear each other, a plywood wall prevented Eva from seeing either Mila or Mila’s trainer and vice versa. The wall also prevented the trainers from seeing each other or the opposite dolphin. Consequently, the timing of actions necessitated a third person to act as coordinator, as can be heard in the video. An open gate between pools allowed Eva to swim over to Mila for the “come” behavior.

Formal trials were conducted in 10 sessions between the 8th and 22nd of October, 2018. Each session consisted of twelve randomized task behaviors, with each behavior tested exactly three times per session. Consequently, for the entire set of formal sessions, communication of each behavior was tested thirty times (10 sessions x 3 trials/session). The communication success rate for each task behavior over the course of all sessions is as follows:

Whistle overlap matching, as found in the vocalizations of Mila and Eva during the “come” behavior, has also been found to occur in wild bottlenose dolphins in association with a type of food-related call during which one dolphin swims rapidly towards a calling dolphin’s location.5 Mila and Eva’s perfect score for this behavior in our formal trials may be attributable to its perhaps innate use in this species as a social signal to facilitate dolphin to dolphin approaches. In contrast, the somewhat lower scores for the other behaviors in our trials may result from the absence of a clear-cut signaling mechanism in the dolphin vocal repertoire, necessitating the invention of some other method (e.g. imitation) to convey the necessary information.

To date we have performed one playback trial. We extracted a section from Mila’s whistle, altered it by removing the upper frequency harmonics, and played it to Eva through an underwater speaker. Eva certainly could distinguish this artificial, band limited whistle from a real one produced by Mila herself. Even so, Eva still started to chorus with the speaker. She stopped at approximate time 6:09, probably because the time intervals between speaker playback segments were too long.6 At one point Eva even started to swim over toward the speaker but then stopped and returned to Juan Carlos (her trainer), probably for the same reason. Compare this spectrogram with the one on the previous page. The spectrogram shown below is from our first playback of a vocalization-like signal to one of the dolphins.

As described here, both Mila and Eva previously had been trained behaviors referred to as “clap” and “sing”. In “clap” a dolphin surfaces and waves her pectoral fins. For “sing”, she surfaces and, with her head out of the water, produces rapid, pulsed vocalizations. For our experiment a trial is successful when Mila conveys the necessary information to Eva, Eva emerges out of the water and performs the behavior in front of her trainer. The following video, narrated by Benjamin, includes both “clap” and “sing”. Note that a portion of the soundtrack starting at 0:54s includes the hydrophone recording of Mila’s underwater vocalization of “sing” to Eva.

In this video: (1) Juan Carlos at the near end of pool cues Eva to “listen”. (2) Eva submerges preventing her from seeing either Alexandra or Mila. (3) Alexandra cues Mila to tell Eva to either “clap” or “sing”. (4) Mila submerges and conveys the necessary information to Eva. (5) Eva surfaces and she performs the requested task to Juan Carlos. Note that the hydrophone recording has been mixed into the video soundtrack at 0:54 so that Mila’s underwater singing to Eva can be heard.

Following is a spectrogram of Mila’s underwater vocalizations to Eva from the above video. Each striped column represents a rapid pulsed segment of Mila’s “singing” vocalization to Eva.

Spectrogram of Mila “singing” underwater to Eva. The x-axis is time and the y-axis is frequency.

It is well known that dolphins imitate other dolphins (and can even imitate humans) 7. For these two tasks the dolphins seem to have solved the communication problem by imitation. In “clap”, Mila has been observed submerging and waving her pectoral fins underwater. The subsequent water motion very likely is sensed by Eva and conveys the necessary information for her to know which behavior to perform. In the second trial in the video, “sing” was conveyed by Mila “singing” to Eva underwater, as heard in the video soundtrack at 0:54 seconds.

For this task Mila must submerge and call Eva to come over to her.

In this video: (1) Juan Carlos at far end of pool cues Eva to “listen”. (2) Eva submerges preventing her from seeing either Benjamin or Mila. (3) Benjamin cues Mila to “call” Eva. (4) Mila submerges and vocalizes underwater to Eva. At this point in the video, the soundtrack has been changed to the hydrophone recording of the dolphin vocalizations. (5) Eva comes over to Mila, they both surface and are given a warm greeting by Benjamin.

Following is a spectrogram of the underwater vocalizations from this trial. In contrast with the “sing” vocalizations, this time Mila vocalized to Eva with a repeating whistle. Almost immediately, Eva replied using a whistle with the same contour as Mila’s. For much of the time Eva was swimming over to Mila, the two dolphins chorused together with matching, overlapping whistles.

Results of the formal trials, performed in October 2018, are summarized here.

We have barely scratched the surface of what we might discover about dolphin communication and cognition with just our current experimental framework alone. Although our first experiment was designed to investigate whether dolphins could master the “tell and listen” communications concept, it yielded several unexpected, novel results that previously had not been reported. Based upon these results, we have created a long list of new experiments that build and expand upon this work. We also have additional experimental frameworks being developed that will facilitate new investigative approaches. Each of these has its own potential for uncovering new communicative or cogitative capabilities in dolphins. We look forward to ongoing, unique discoveries for the foreseeable future.

We hope you found this site to be interesting and informative. Please feel free to get in touch. We would enjoy hearing from you.