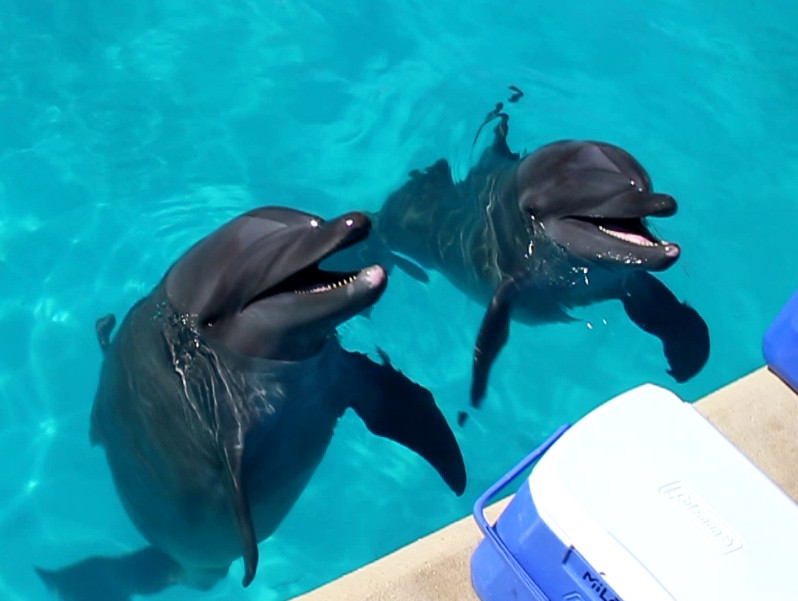 As described here, both Mila and Eva previously had been trained behaviors referred to as “clap” and “sing”. In “clap” a dolphin surfaces and waves her pectoral fins. For “sing”, she surfaces and, with her head out of the water, produces rapid, pulsed vocalizations. For our experiment a trial is successful when Mila conveys the necessary information to Eva, Eva emerges out of the water and performs the behavior in front of her trainer. The following video, narrated by Benjamin, includes both “clap” and “sing”. Note that a portion of the soundtrack starting at 0:54s includes the hydrophone recording of Mila’s underwater vocalization of “sing” to Eva.

In this video: (1) Juan Carlos at the near end of pool cues Eva to “listen”. (2) Eva submerges preventing her from seeing either Alexandra or Mila. (3) Alexandra cues Mila to tell Eva to either “clap” or “sing”. (4) Mila submerges and conveys the necessary information to Eva. (5) Eva surfaces and she performs the requested task to Juan Carlos. Note that the hydrophone recording has been mixed into the video soundtrack at 0:54 so that Mila’s underwater singing to Eva can be heard.

Following is a spectrogram of Mila’s underwater vocalizations to Eva from the above video. Each striped column represents a rapid pulsed segment of Mila’s “singing” vocalization to Eva.

Spectrogram of Mila “singing” underwater to Eva. The x-axis is time and the y-axis is frequency.

It is well known that dolphins imitate other dolphins (and can even imitate humans) 7. For these two tasks the dolphins seem to have solved the communication problem by imitation. In “clap”, Mila has been observed submerging and waving her pectoral fins underwater. The subsequent water motion very likely is sensed by Eva and conveys the necessary information for her to know which behavior to perform. In the second trial in the video, “sing” was conveyed by Mila “singing” to Eva underwater, as heard in the video soundtrack at 0:54 seconds.

For this task Mila must submerge and call Eva to come over to her.

In this video: (1) Juan Carlos at far end of pool cues Eva to “listen”. (2) Eva submerges preventing her from seeing either Benjamin or Mila. (3) Benjamin cues Mila to “call” Eva. (4) Mila submerges and vocalizes underwater to Eva. At this point in the video, the soundtrack has been changed to the hydrophone recording of the dolphin vocalizations. (5) Eva comes over to Mila, they both surface and are given a warm greeting by Benjamin.

Following is a spectrogram of the underwater vocalizations from this trial. In contrast with the “sing” vocalizations, this time Mila vocalized to Eva with a repeating whistle. Almost immediately, Eva replied using a whistle with the same contour as Mila’s. For much of the time Eva was swimming over to Mila, the two dolphins chorused together with matching, overlapping whistles.

Results of the formal trials, performed in October 2018, are summarized here.